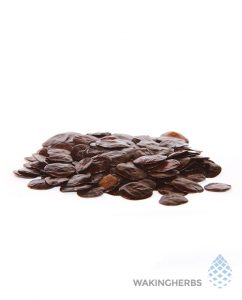 A magnificent tree, the Anadenanthera peregrina or Yopo is a perennial tree, native to the Caribbean and South America, will grow to reach heights of 20 meters. The leaves of the tree are feather-like and made up of several smaller leaves. The flowers are yellow to white and spherical, which later turn into seedpods, carrying many small seeds. It is the seeds that are most revered by indigenous cultures of South and Central America. Traditionally, the seeds are used in sacred rituals and healing ceremonies. Through archeological findings, we now know that the seeds were once used as hallucinogens thousands of years ago. Smoking pipes were found, dating back 4,000 years ago, have be found to contain trace amounts of Di-Methyl-tryptamine, one of the chemical constituents know to induce hallucinations. Of more recent use, 1200 BC, snuff trays and tubes were discovered, demonstrating that these seeds have been used for insufflation or as a snuff, for the purpose of spiritual healing by the people of the Brazilian Amazon, as well as Colombia and Venezuela.