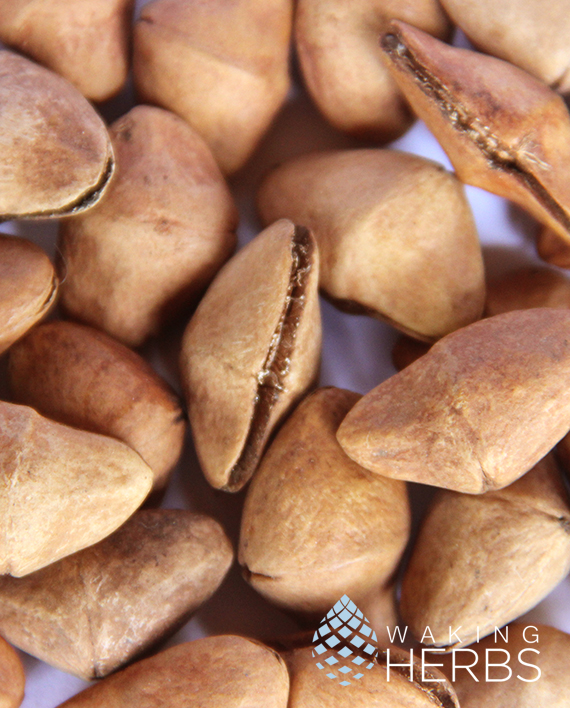 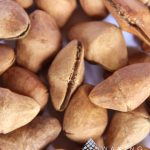 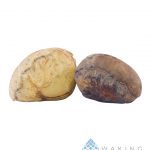 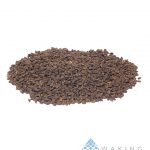 Warning these seeds need to be handled with care due to Strychine content. We sell them for planting and collecting purposes only.

Two different different plants share the name camalonga or cabalonga, the first term being more common in in Perú and the second in Colombia. The first of these two plants, sometimes distinguished as camalonga negra, apparently may be any of several species in the genus Strychnos, including some that are used in the manufacture of the arrow poison curaré. The second, sometimes distinguished as camalonga blanca, is pretty clearly Thevetia peruviana, the yellow oleander.

In Spanish generally, the word cabalonga refers to the almond-like seeds of the tree Strychnos ignatii, native to the Philippine Islands and China, which are popularly called haba de San Ignacio, St. Ignatius beans. In some parts of Perú, these seeds are worn as amulets, as they are in the Philippines, and the imported seeds are distinguished from the indigenous Amazonian species, cabalonga de la selva, jungle cabalonga. This imported cabalonga is apparently highly valued. The dried pear-shaped fruits containing these seeds are rare and, according to Christian Rätsch, are sold under the table at herb markets for exorbitant prices, with counterfeits sometimes substituted for the unwary.Interestingly, according to Rätsch, in Mexico, just as in the Upper Amazon, the word cabalonga is used to refer both to Thevetia peruviana and to a Strychnos species, Strychnos panamensis.

Apparently, Colombian shamans prefer to use seeds of plants of the Strychnos genus, while Peruvian shamans prefer to use the seeds of Thevetia peruviana. Peruvian shamans incorporate yellow oleander seeds into a drink, also called camalonga, along with aguardiente, camphor, and white onion or garlic. The drink generally contains two seeds, one male and one female. Although it is sometimes said that camalonga seeds may be added to the ayahuasca mixture, I have not found evidence that this is the case. In Perú, camalongueros are shamanic practitioners who specialize in the use of this camalonga drink.

I do not understand why the two camalongas are given the same name. The plants do not look even remotely similar, and the seeds — the part most often used by shamans — look as dissimilar as the plants. Moreover, the plants contain very different alkaloids, with very different psychophysical effects.

The yellow oleander contains the powerful cardiac glycosides thevetin, thevetoxin, peruvoside, ruvoside, and nerifolin, which are found throughout the plant, but are concentrated in the seeds. Ingesting yellow oleander seeds can cause abdominal pain, vomiting and diarrhea, dilated pupils, increased blood pressure, dizziness, stimulation of the smooth muscles of the intestine, bladder, uterus, and blood vessels, and a variety of arrhythmias, which can be fatal. Chewing the seed causes a drying, numbing, or burning sensation in the mouth and throat. The sap of the plant can cause skin irritation, sometimes blistering, and the plant has been used as a fish poison.

On the other hand, the primary effects of plants of the Strychnos genus are muscular and neurological. The active constituent of these plants is strychnine, which increases the reflex irritability of the spinal cord, resulting in a loss of normal inhibition of the body’s motor cells, in turn causing severe contractions of the muscles. Signs and symptoms of strychnine overdose include agitation, apprehension, fear, heightened startle reflex, restlessness, dark urine, muscle pain and soreness, and difficulty breathing, which can progress to rigid arms and legs, jaw tightness, painful muscle spasms, and finally to uncontrollable arching of the neck and back, respiratory failure, and brain death. Death is usually due to asphyxiation resulting from continuous spasms of the respiratory muscles. At very low doses, strychnine may give a sense of alertness, sensory acuity, and wakefulness; indeed, at one time it was widely prescribed in England as a tonic.

I have seen only scant anecdotal evidence that strychnine ingestion causes prodromal dizziness or lightheadedness. Thus, I am not sure what to make of the claim that true cabalonga can be identified by putting a tiny piece under your tongue and experiencing sensations of dizziness within a few moments.

None of the constituents of either type of camalonga has been reported to be psychoactive. Neither appears to be widely used medicinally. Strychnos guiananesis — called comida del venado, deer food — mixed with uña de gato, cat’s claw (Uncari spp.), has reportedly been used as a genital wash to treat venereal diseases, but its primary use is as an ingredient in curaré.

Yellow oleander is used — as you would expect — as a purgative, and the leaves to treat toothache, presumably because of their numbing effect in the mouth. It is also considered an abortifacient, which is probably correct, given its stimulatory effect on the muscles of the uterus.

Our products are not certified by the FDA neither Health Canada for human consumption. They are sold for incense and soap making purposes, decorative purposes and/or legitimate ethnobotanical research. Our products are not sold and intended for human consumption. The information given about the plants is for academic purposes only and not intended to be used medically. Wakingherbs.com, its suppliers, agents, employees and distributors cannot be held accountable for any misuse of the products offered.