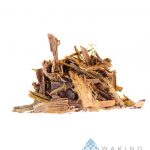 Nukini Rapé #16 “Connection to self”

The effects of this Nukini Rapé are both relaxing to the body and uplifting to the spirit. It draws one’s awareness out of the clutter filled mind and back into the body, where one experiences a deep sense of ease, balance and connection to self. The physical body melts into a state of relaxation, as built-up muscle tensions and soreness are washed back into the earth and one is able to access ease of body and mind.

This medicine is particularly useful in times when the mind is active with repetitive thought patterns, or following a stressful day. It is also helpful when the physical body feels tight and tense. This is the perfect Rapé to de-stress.

We are proud to offer a high quality Nukini Rapé that comes directly from the Nukini tribe. Francisca Nuquini, who made this rapé is unsure of how old she is. However as an elder of the tribe, she says that she has been gathering and preparing sacred plants for as long as she can remember. A humble and gentle woman, she speaks slow and intentionally. However, when speaking of her medicines, her face lights up with a warm smile and her sweet laughter fills the space. During the weeks that we spent with Francisca, she shared with us the ancient secrets passed down to her from her Grandmother about how to prepare the best Rapé. She tells that the power is in the songs she sings to the plants before harvesting them for medicine and the special manner in which each part of the plant is respected and cared for throughout the entire preparation process.

This beautiful aromatic Rapé is a formula made from the Inga edulis plant, which is commonly known as Guaba, Joaquiniquil, Cuaniquil, or in English Ice Cream bean. The Inga is made into an a very fine white ash that provides the basis for this restorative Rapé. It is mixed with a relatively unknown medicinal plant called Sharamasha by the Nukini, including this one. It is known for its ability to clear heavy and dense energy from the energetic field. Furthermore for cleansing negative and cyclical thought patterns and emotions that are arising and cleared from the heart and mind. For clarity in the body, mind and spirit.