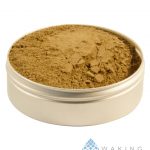 The Nukini regard this prized Rapé as an aphrodisiac and sexual tonic. It facilitates an enhancement of libido by increasing the vitality of the body and acting as a tonic for the reproductive and sexual organs of both the male and female. This invigorating sacred tool enlivens the heart, body and spirit. This Nukini Rapé opens the channels of creativity and inspiration by activating the sacred sexual energy within the spine, while also balancing and opening the chakra system. It is a wonderful remedy as well for bringing balance to the emotional body, helping to clear away sadness, anger and any heavy or stuck energies, amplifying our capacity to love and create.

The Rapé, from the Nukini is known to be filled with feminine power as they are often formulated and prepared by the women of the tribe. Many of their blends contain a flowery, fresh odour and offers a wonderful sense of grounding and clarity.

We are proud to offer a high quality Nukini Rapé that comes directly from the Nukini tribe. Francisca Nuquini, who made this rapé is unsure of how old she is. However as an elder of the tribe, she says that she has been gathering and preparing sacred plants for as long as she can remember. A humble and gentle woman, she speaks slow and intentionally. However, when speaking of her medicines, her face lights up with a warm smile and her sweet laughter fills the space. During the weeks that we spent with Francisca, she shared with us the ancient secrets passed down to her from her Grandmother about how to prepare the best Rapé. She tells that the power is in the songs she sings to the plants before harvesting them for medicine and the special manner in which each part of the plant is respected and cared for throughout the entire preparation process.

The Cecropia membranasea or commonly referred to as Cetico in Brazil, makes up the base for this formulation. The plant matter used is rendered into a fine and pure white ash where other medicines are then added into it. The Cetico itself contains a profile of chemical constituents including flavonoids, steroids and terpenes. Research is showing that this plant is an effective hypoglycemic, analgesic, antiulcer, along with antimalarial properties and it also possess wound healing abilities.The Cetico has been used as a sacred medicine by the Nukini for centuries and facilitates a deepening of one’s meditative experience while opening a channel for the absorption and activation of the other properties it is combined with.

The Cumaseba tree (Swartzia polyphylla), is a powerful Master Plant Teacher used by various indigenous tribes of the Amazon, from Brazil, Peru and Colombia. It can grow to heights of 15 meters and is typically found in lower elevations such as in the Amazon basin. Research on this plant hard to find, however, there are many who allude that traditionally, it has been used as an entheogen and that it does possess psychoactive qualities. It is said that this beautiful flowering tree has been used in the past to communicate with spirits and dispel evil forces. On a physical level, Cumaseba has traditionally been used to treat various ailments such as rheumatism and arthritis, painful and inflamed joints or muscles, it acts as a female hormonal tonic, treats various yeast and fungal infections and is an antibacterial for colds and flu, as well as for upper respiratory tract infections.

Along the lush green banks of the Rio Poa, lives a very special group of indigenous peoples, known as the Nukini. Their language comes from the Pano linguistic root. Found in the centre of Acre, Brazil this small tribe of 900 people live in the heart of the Amazon. This region also borders along Peru and Bolivia where dense tropical forests are filled with a floracopeia of sacred plants. The majority of the plants that are used for making medicines and handicrafts are gathered by the women of the tribe.